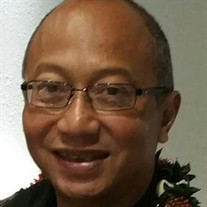 Not sure what to send?

April 14, 1966 ~ August 18, 2021 Engineer, Historian, Modernist, Collector, Adventurer, Surfer, Beloved Husband and Companion Goro Saladin Santosa Sulijoadikusumo was lost to us in a surfing accident on August 18, 2021. He was 55 years old. He is survived by his wife Lisa Abbott; daughter Ashley Abbott (Alistair) Mercado; grandson Cannon Mercado; sister Sarasina (Mike) Tuchen, brother Indra and relatives in Indonesia with whom he remained close. He is predeceased by our two beloved shihtzus Sammo and Pono. He is also predeceased by his parents Ahmad Usuluddin and Listijowati Suhardjo Sulijoadikusumo, both born in Java. Goro’s brother Indra shares that Goro was extremely proud of his Javanese heritage. Goro’s grandfather, Muhammad Sulijoadikusumo was the second person to be appointed Indonesia’s Minister of Defense 3 months after the nascent country declared its independence from Dutch colonial rule. Goro was born in Bandung, Java and came to the US with his parents at age 3. Goro attended Lawrence North High School in Indiana and was a varsity wrestler and athlete. Raised to be environmentally conscientious from a young age, he was very concerned about the human impact on the environment and the type of planet that we would be leaving for future generations. Goro graduated from Purdue University with a degree in Construction Engineering in 1988. He secured a job at Bechtel, but left when a chance to come to Hawaii opened up. As Construction Engineer with American Constructors he built Whitmore Circle Apartments, Nimitz McDonalds, did extensive historic renovations on the Edwin Thomas Home and built the 20,000 square foot Tomomi Kimura Corporate Retreat on Kahala Avenue among other projects. He was active in hiking, surfing, kayaking and met the woman who would become his wife, Lisa Abbott, at an infamous Halloween Party while they were in graduate school. While they separated for a time when he left Hawaii to return to Indonesia, the love they shared remained strong. Goro returned to the US and obtained his Master’s Degree in Transportation Systems Engineering from Cornell University in 1996. After graduation, he returned to his ohana in Hawaii and began a far-reaching career with the State of Hawaii Department of Transportation. If people asked him what his job was he would say “I’m just the data guy”. His good friend Volker Este said “The Transportation vertical will miss Goro’s professional contribution. Goro consistently published and presented at numerous conferences local and international. His quest for excellence and continuous improvement in the modeling of transportation systems made his industry contribution significant among his peers. Goro led the charge on autonomous vehicles and the future of transportation by writing grants, hence leading the industry to accept new paths forward. Goro’s work with the Statewide Transportation Planning Office on the initial planning for a statewide Ferry System led to federal approval of the intra-island ferry demonstration project. Goro’s heart was always focused on making this a better world. His peers and friends at the Hawaii Department of Transportation, friends at the University of Hawaii, colleagues and friends worldwide miss him dearly”. While Goro made jokes about “data free analysis”, his colleague and surfing companion Doug Meller shared “Thanks to Goro's vision and initiative, anyone with a computer connected to the DOT intranet can easily use that computer to access and "drive" either forward or backwards, at any speed, along every lane, of every State or county highway in Hawaii which is eligible for federal funding”. Goro championed the development of digital pictures on the DOT intranet linked to traffic counts, functional classification, pavement roughness data, highway numbering and milepost information. Goro was recently remembered by his lifelong high school friends, many of whom traveled to Hawaii to spend time with Goro and Lisa, eating out at the Elks Club or with Goro teaching them how to surf. He and Lisa lived their lives to the fullest, traveling to visit family and friends, cruising to Tahiti, going to Europe and Indonesia and taking “road trips”. Goro and Lisa spent their free time in Hawaii working on their home, going to see live concerts, museum and cultural events and volunteering in the community. The yearly Christmas Eve Party at their Kaimuki home was a major event. Goro loved all things Modern, joining Docomomo Hawaii and Goro had a well visited Instagram and Facebook profile. His laughter was unique; his wit was sharp. He was unforgettable. He made prize winning Japan pear and mango pies. He was an avid map and book collector. Goro was a loving husband, father, grandfather and generous friend. His wife, family and friends are beyond heartbroken to lose this incredible man so soon. A Memorial to Celebrate the Life of this remarkable man will be held FEBRUARY 5, 2022. SEE BELOW. Ashes will also be placed in his Family Crypt in Indonesia. No one can or will ever replace Goro in our hearts. Contributions in his memory can be made to Historic Hawaii Foundation, Old Friends Senior Dog Sanctuary or any other organization that Goro was known to champion. FAMILY, FRIENDS, CO-WORKERS AND COMMUNITY INVITED TO REMEMBER AND CELEBRATE THE LIFE OF GORO SULIJOADIKUSUMO. DATE OF SERVICE: 2/5/22 LOCATION: HONOLULU ELKS LODGE 616, ADDRESS: 2933 KALAKAUA AVENUE, HONOLULU, HI. 96815 TIME: 9:00 AM - 12:00 PM. INSIDE EVENT LIMITED TO 75 PEOPLE DUE TO COVID AT THIS TIME. VACCINATION REQUIRED. VALET PARKING AT THE ELKS CLUB. BRUNCH INCLUDED. SPEAKERS WELCOME. PADDLE OUT AT DUKES BEACH 11:00 AM. PADDLE OUT LIMITED TO SURFERS/SWIMMERS AND CLOSE FRIENDS/FAMILY (25 PEOPLE MAX, PARTICIPANTS ASSUME ALL RISKS). LIMITED PARKING AT BOTH VENUES. FLOWERS WELCOME NO LEI. RSVP BEFORE JANUARY 15, 2022. EMAIL: Lisa Abbott at: [email protected] LET US KNOW WHICH EVENTS YOU WILL BE PARTICIPATING. WE LOOK FORWARD TO SEEING YOU ALL TO CELEBRATE THE LIFE OF GORO SULIJOADIKUSUMO!

The family of Goro Saladin Santosa Sulijoadikusumo created this Life Tributes page to make it easy to share your memories.

A comforting word from you means a lot.

Send flowers to Goro's Celebration of Life and Memorial Service for all who wish remember Goro and say Aloha! Saturday Feb.