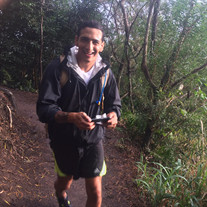 Omar’s Journey Omar was a miracle baby, born premature at 4 pounds in Fontana Kaiser, California on April 28, 1990 to Edith and Osman Trad. He became a fighter from day one. Omarcito was introduced by his parents to every opportunity and instilled from a very young age a strong relationship with God & family as a principal aspect in his life. He valued and was intimately engaged in both of his Lebanese and Peruvian cultures. In his youth from age seven to age 16 Omar was a boy scout. This is where he discovered his love for nature and his passion for outdoor activities. Omar was serious about helping his community. He became a Basic Life Support Instructor at age 16, he trained medical professionals in CPR, first aid, and shared techniques on how to save lives in emergency situations. Omar was an experienced tennis player and swimmer from age four until 16 From age 16, Omar held different jobs and volunteered a great deal. He assisted at the Lions Club, the city of Moreno Valley, and the Rotary Club. He participated in health fairs and cities clean up at Redlands and other locations. He worked at rest homes for the elderly in Yucaipa and assisted with fundraisers in community clubs. Omar was the epitome of giving back to the community, constantly trying to make the world a better place. In 2013, Omar earned a Bachelor of Science degree in Communication Disorders from the University of Redlands. After graduation, Omar traveled to Peru where he spent the next six months with his family as he worked at a speech pathology center and hospital as an internship to improve his bilingual professional skills. In Peru, Omar continued his exploration and love for outdoor adventure, partying, friends and family. Afterwards, true to his adventurous spirit, Omar traveled to Hawaii where he started his Masters of Arts Degree and credentials certification in the field of Speech Pathology at the University of Hawaii. Omar wanted to help people with speech disabilities and to provide them with the gift of expression for better communication and understanding to enhance their quality of life. Omar was employed by Behavioral Health Hawaii, additionally he worked part time at UGG Australia in Honolulu. Prior to that he worked at Urban Outfitters where he met his extended Hawaiian family. Omar's young work journey also took him to New York Camp Pontiac during several summers. Omar lived his life to the fullest. He traveled extensively with his parents as well as alone, finally choosing the Island as his personal paradise which he also called home. He had a vibrant personality and lived with an intensity that is seldom seen in people his age. He was enthusiastic about living and embraced diversity and challenge. He loved chess games, drawing, ceramics and rap music. He also had a passion for cars, movies and recently boats. He enjoyed snowboarding, hiking, fishing, camping. The last four years he intensely retook his passion for the outdoors, nature and water sports, including scuba diving and spear fishing. He took the path less traveled and that made all the difference for him. Omar will be remembered for his smile, sweet disposition, caring for others, kindness, generosity, gusto, panache, sense of adventure and genuine caring soul. He will never be forgotten by his family and friends. He is survived by his mother and father Edith and Osman Trad.

Omar&#8217;s Journey Omar was a miracle baby, born premature at 4 pounds in Fontana Kaiser, California on April 28, 1990 to Edith and Osman Trad. He became a fighter from day one. Omarcito was introduced by his parents to every opportunity... View Obituary & Service Information

The family of Omar Trad created this Life Tributes page to make it easy to share your memories.

Omar’s Journey
Omar was a miracle baby, born premature at 4...

A comforting word from you means a lot.

Send flowers to the Trad family.